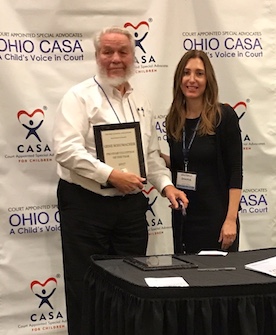 Senator Lehner paid high tribute to CASA volunteers, saying, “You’re honoring me but, frankly, you are my heroes.”

The senator spoke about the challenges facing Ohio, including the opioid epidemic and the effects of poverty on the educational performance of children. She will soon introduce legislation requiring school districts to provide training to instructors on trauma-informed education and cultural competence, Senator Lehner said.

PICTURED ABOVE: Gene Schumacher and Ohio CASA Board of Directors President Diana Turoff.