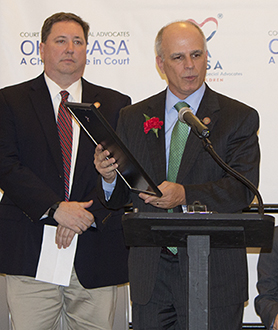 As co-hosts of Ohio CASA’s 2017 CASA Day in Ohio event, Representatives Jeffery S. Rezabek (far left) and J. Kyle Koehler will lead the ceremony for the second year running. The two will share the stage with public officials and private citizens to spread the word about court appointed special advocate volunteers and their value to their communities.

Judge Chad L. Carey of the Clinton County Juvenile Court will make remarks to recognize the contributions of the more than 8,000 CASA volunteers in Ohio, who advocate in court for the best interest of maltreated children. Carla Carpenter, director of the ODJFS Office of Families & Children, also will give her perspective.

Ohio CASA will recognize its 2016 annual award winners, and Pro Star Volunteer of the Year Kristen LeProvost (Voices for Children, Lorain County) will talk about what it means to be a volunteer.

Rezabek and Koehler will present a House resolution to Ohio CASA board president Diana Turoff that declares April 30 “CASA Day in Ohio.” It will be the seventh such declaration from the General Assembly.

The CASA Day in Ohio ceremony is held each year during National Child Abuse Prevention Month, seen as a fitting time to recognize the dedication of CASA volunteers. Program staff, volunteers, judges and legislators are encouraged to attend.

GROWING NEED
The need for CASA volunteers is at its peak as the number of Ohio children neglected by overdosing parents continues to increase. The number of infants born addicted to opiates is also up. The Public Children Services Association of Ohio reports a statewide increase of 13 percent in the number of children in foster care since 2012. More than half are the children of drug users. Not only has the number of cases increased, but the cases last longer, meaning fewer existing volunteers are available to take new cases.

To attend the CASA Day ceremony or to request more information, click here.